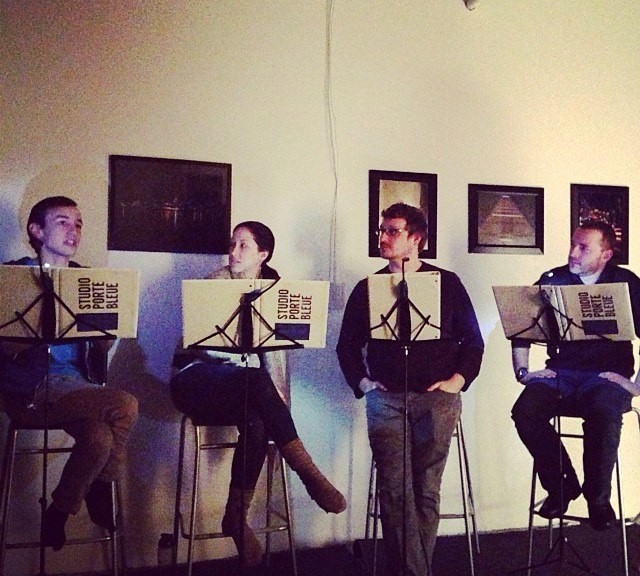 Colin Lalonde, Montreal-based performer and artistic director, is producing a new performance project about the cloud—yes, the one that promises to be available everywhere and house all of your family pictures! I met Lalonde during my Master’s studies at the University of Warwick (UK). Also, we have been regular collaborators for Unlisted: a performance series, both in Belgrade (Serbia) and Pittsburgh, PA (USA). Lalonde generously gave me  five minutes of his buzzing time to discuss the recent project phmrl.DATA,  as well as describe the process of starting a multidisciplinary performance studio in Montreal.

–How did phmrl.Data develop from idea to production?

Like a lot of my projects I had the idea for form before the idea for the piece came. phmrl.DATA’s inspiration came from taking part of a conference on performance curation where one of the speakers was asking us all yes and no questions. I noticed that people seemed to get an odd joy from sharing this information in public. I then connected that to my growing interest in how we behave online and thought it would be interesting to write a piece that was simultaneously a pitch for a data-mining company and an act of data-mining itself. So I recruited Kelly O’Toole and we started research on big-data, writing and piecing the performance together in rehearsals.

-Why do you have an interest in big data?

I guess you could say I’m interested in big data because big data seems to be very interested in me. I felt somewhat ignorant to trends that are increasingly having major effects on our lives. Living in the times that we do, most of us spend an immense amount of time online, we have GPS enabled smartphones, and have sensors that track insane amounts of data in our cars. All that data is being used to make decisions that have pronounced effects on all of our lives. The most obvious for me is getting information from Google or Facebook that Google and Facebook have determined is of interest for me. These trends in some ways raise serious questions as to the role of free will for individuals. There’s so much potential for good in big-data but there are some serious red flags to ponder on.

-How does performance help address the concerns or promises of big data?

Essentially phmrl.DATA is a participatory performance where spectators view a pitch by the phmrl.DATA team convincing them to join their “large net platform” where all the world’s data will be concentrated. The pitch is then interspersed with questioning of the audience, which acts as a tool for the company to collect everyone’s data. The idea being that we already give so much information online (which is ultra public), so how does that act feel in person and in a more intimate public? We hope that this uncomfortable feeling and dissonance to what is being said by the characters leads to some questioning of our current state of affairs regarding privacy and the Internet.

-What are the limits of the project to deal with issues about big data?

We have a fairly large scope for the project. It acts mainly as an introduction to technologies and anecdotes about big-data as well as its promises. We speak about past big-data projects like Google’s Flu Trends that tracks where the flu virus is spreading through the aggregation of search terms. We also talk about future trends in big data such as Facebook’s app that listens to what you’re watching on tv and the radio through the microphone on your smartphone. The piece really dances a fine line between being almost documentary theatre and sci-fi satire.

-Can you describe the development of SPB and your role within the project?

Studio Porte Bleue was my way of putting into practice all of the amazing experiences I had had over the past few years outside of Montreal, while living in Ottawa and traveling the world with the likes of you and the others in our Masters. I’m the artistic director of the company, so with a small indie company that essentially means I do everything that needs doing. In this case it was a bit too much as I literally wrote, directed, produced, and performed the piece. It was a bit all consuming and continues to be.

– How do you switch between the roles of artistic director, writer, actor and director?

I’m a collaborative artist by nature so I find it depends on the people I’m collaborating with and how I’m going to adapt for each individual project. The main challenge I’m discovering is letting go in some cases, I’m negotiating a project for November where I will be producing and performing in the piece and having a visiting artist direct. So I’m figuring out how to get out of her way and just do the nitty-gritty of producing and leaving out the early artistic planning which has to be owned by the director or the show will just be artistic soup.

-It’s almost a year since you started SPB, how’s the first year going? What are some of the challenges of managing the studio?

It’s going well! I’m happy with our progress, we’re creating interesting work and having the kind of connection with our audience that I think is unique and is genuinely respectful and constructive. My main challenge is working on multiple shows at one time. It is a bit of a schizophrenic experience.

-What other projects do you have lined up for the upcoming year?

This summer we’re inviting Chris Bell to stay with us and work on three performances with us. We’ll be working on one that explores labor and oral histories, we will be developing a show where he will be cooking for and eating with the audience while discussing the fall of Yugoslavia, and finally in November we’ll be presenting a piece on Jack Kerouac. All very different and all very exciting. And as always I’m thinking of what will be next.

You can keep up with Colin Lalonde and all other Studio Porte Bleue productions via Facebook or their blog.