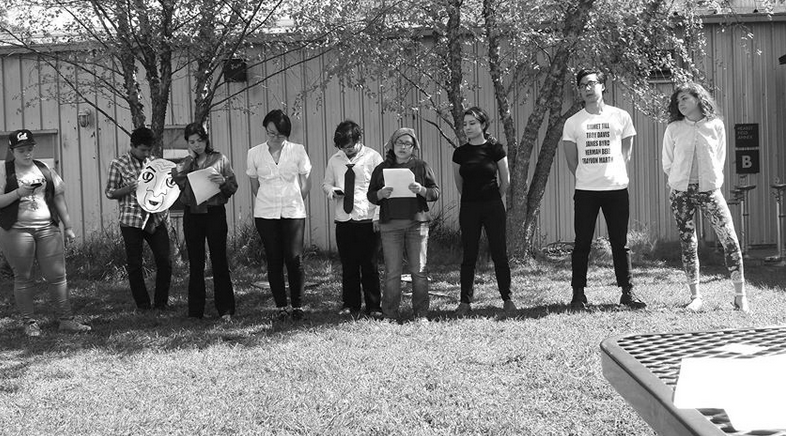 Bubbles are meant to burst. Enter Natalie Sanchez and her collaborators of Performance Colectiva, a group composed of current students as well as recently-graduated students from the University of California at Berkeley (CAL). Natalie and the troupe’s collaborators successfully graduated from the Department of Theater, Dance and Performance Studies (TDPS) with the mission to connect and bridge communities in the San Francisco Bay Area through performance. Performance Colectiva’s story is one of an exciting theatrical beginning in a class that catapulted outside the campus. Natalie recently sat down with me at CAL’s Free Speech Movement Cafe to talk about her experience and the development of Performance Colectiva.

Performance Colectiva formed out of a desire to continue the work started in a class. Natalie registered in Performance Studies Professor Angela Marino’s Teatro Lab class, created by Marino in 2013 to give CAL students an opportunity to learn about theatre in Latin America. Teatro Project is a group of Latinas/os in the Theater and Performance Studies Department advocating diversity across the campus and the local community. Working rigorously throughout the Spring semester, the lessons culminated in a community performance Bodies, Buildings, Borders: An Experimental Showcase. The student performance addressed themes directly impacting students of color by weaving personal reflections on the experience of higher education with perceptions of community struggles and political challenges.  Moved by the rewarding experience of the class and the reception of the production by the community attendees, the students felt compelled to continue working after the semester ended. Thus, Performance Colectiva was born. Natalie, in the final semester of senior year, felt the determination to enroll in one more semester to minor in Theater and Performance Studies.

Natalie’s decision to stay an additional semester proved invigorating, but also critical in crystallizing the reason for Performance Colectiva. Following the initial performance, the students organized other performances and community  interventions to confront and burst the “Berkeley Bubble”. According to Sanchez, the “Bubble” is the resulting effect of students from CAL closing off ties with the communities in non-campus Berkeley and the greater East Bay. In the process of bursting the bubble, she has cultivated new relationships with the graduating students and with Marino, as well as found enriching opportunities to work with distinguished Bay Area Latino playwrights.

In Spring 2014, they helped bring Octavio Solis to CAL. As special guests to the Association for Theater in Higher Education annual conference,  they, alongside the Teatro Project,  adapted, directed and performed Luiz Valdez’s Zoot Suit. What is more, both the Teatro Project and Performance Colectiva are assisting TDPS with bringing eminent playwright Luiz Valdez to the UC Berkeley Campus. On November 18, Valdez will give the Keynote Lecture “The Power of Zero.” The lecture is opened to both the campus and community at large.

Ultimately, Sanchez remarks, Performance Colectiva’s goal is to be a “performance pipeline so folks that don’t identify with the [TDPS] department can go in and learn about their identity and find strategies and inspiration through taking classes.” They seek to provide a dual process for community engagement: CAL students connecting to the community and the community engaging with the department.  Hence, while Performance Colectiva uses performance as their practice to speak in educational spheres about issues affecting students of color,  they are equally involved in the community advocating migrant justice, fair wages and political enfranchisement.

Support Performance Colectiva and learn more about where to watch their upcoming performances.

One thought on “Performance Colectiva: Latinas and Critical Community Practice”