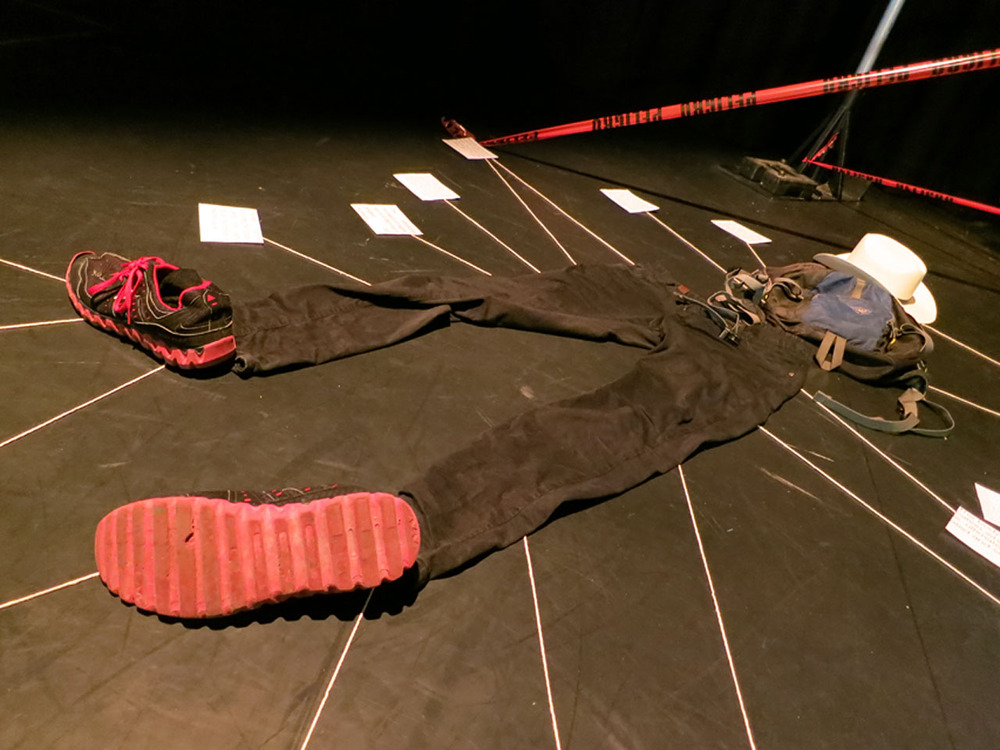 As a choreographer, sound artist, and video maker, I make bi-lingual, tender, reflective, witty, and complex partnering performances with the belief that the intersection of contemporary dance theater and social justice makes us think and move in more inclusive ways. My Latinx hybrid choreographies draw from my experience as a translational migrant and they create new forms of relating to each other in a world divided by discourses of borders, racism, and sexism. Dance is a powerful medium that allows me to address issues about migration, transnational identity, and border crossings. It lets me focus on the bodies and their movements, exposing the borders that try to contain and limit the freedom of those bodies. My practice invites participatory critical thinking about how bodies are included and excluded in our society. I give attention to the way dance can specifically address issues of migration because it prioritizes movement as a mode of analysis. I utilize ethnographic, experimental, and site-specific methods in collaborative and solo creative processes. Because dance gave me a place in this world, I utilize it to emphasize a border-crossing approach to create welcoming communities.

On Crossing Disciplinary and Aesthetic Borders

I combine dance movement with narratives to communicate stories that are transnational and intimate. For example, in a project such as Cinco Palmas (USA/Mexico, 2015-Ongoing) I take up the theme of the undocumented experience. Cinco explores the conditions that make Central American youth decide to leave their homes and travel through Mexico on their way to the United States. I wanted to call attention to the contradictory feelings that are present in the migrant experience. Cinco combines modern dance and hip hop genres, as well as incorporated multi-lingual and multi-media aspects, to accentuate the dynamic feelings that migrant youth experience when they move from one country to the other. It focuses on the sensations of wonderment, joy, anger, and fear on the youth’s journeys across uncharted terrains.

Attending to migration as a key theme in performance gives insight into other ways in which bodies move, freely or forcibly. The objective in Transfer over Wooden Tables (2013) was to relate the economic conditions in Ireland with international labor market systems. I collected stories from rural farmers in Cloneen, Ireland who reflected on the changing economic conditions of agricultural practices after the 2008 financial collapse. These stories were crafted into a script for a site-specific performance on a three-hundred-year-old cattle farm. The location was chosen specifically because it was abandoned due to the difficulty of family farmers not being able to compete with international agricultural conglomerates. Likewise, that same year, I was the featured choreographer invited to Unlisted Festival, in Pittsburg, Pennsylvania, to collaborate with the largely Black community in the Hill District. I collaborated with local and international playwrights and design artists to address the displacement caused by gentrification. We developed the piece A Village in the Woods on a Hill in the City at the Crossroads of the World. The performance questioned the process of urban revitalization, assessing who becomes a beneficiary and who is forced to relocate. During a discussion after the performance, residents expressed how the performance effectively expressed the feeling of anxiety that they felt in the community with all of the development projects.

Prioritizing a border-crossing approach makes room to traverse aesthetic borders too. In pieces such as M (2008) and Cacacafine, Cucumbia (2013), I experiment with breaking down the idioms of Mexican regional dances as a way to highlight the evolving nature of these “folk” forms. In M I collaborated with family members to create a quintet about social dance practices, adapting popular dances from quinceañera waltzes to music by John Cage. Similarly, in Cacacafine, Cucumbia, I distort the beats from banda and cumbia music, juxtaposing these rhythms and steps with modern, post-modern, and balletic vocabularies.

Dance and textual performances that also cross psychic borders cultivate individual growth, offering a process to reconcile anxieties and fears about alienation. In Comic Hero of Two Cultures (2011), I fused my personal experience as a victim of racial crimes to expose larger social issues of systemic racism and homophobia. My solo work was initially a creative response to the lack of financial support available to me because I was ineligible for grant funds due to my undocumented status. Because federal and state funds were out of reach for me, I produced new solo works that were not a financial burden. More important, I learned to incorporate used and found objects into pieces. This practice became the foundation of my creative process because since then I have helped individual artists identify and develop their aesthetic voices.

My border-crossing methods begin with hunches and anxieties. The guiding question is “What unsettles you?” This query begins the creation process because it honors the body as the site of knowledge to reach understanding about a problem in our world that generates unrest. Then, those anxieties become the impetus for explorations and improvisations. In this way, the dances originate from observations and then cross disciplinary and aesthetic boundaries. For example, in Los Tres Peligros (Mexico, 2012), I used direct conversations with former migrants about what instigated their departure from and return to San Francisco del Rincon, a rural town that has a high percentage of sending migrants to the United States. Over a three-month investigation, I interviewed and conducted embodied movement workshops with the residents of the community, facilitating reflection about their migrant experience. Finally, I incorporated these materials for a roving, site-specific production throughout the landscape of the town. Afterward, one audience member expressed feeling she understood her migrant husband’s experience better thanks to the performance. By producing non-traditional, participatory, and intimate performances, artists and audiences alike gain a clearer understanding about the perilous impact of migration.

Similarly, dances that attend to people on the move and what disquiets them can be used to address pressing concerns about our role in place-making and our influence on the environment. During my residency in England at 5 Acre Farm, I interviewed local growers and community members about food in/security. I used these interviews to create an interactive installation piece at the annual agricultural show in Kenilworth. The piece gave festival visitors a direct and physical approach to understanding the properties of soil and its degradation due to climate change, which is leading to soil erosion and causing mass migration. Subsequently, the participants’ responses formed the basis of an immersive performance at the five-acre community farm in Coventry. Thus, our concerns about our environment and our place in it became the source of our creativity.

As a transnational migrant from the age of six, I have used dance as a means of dealing with the precarity of movement and belonging. Dance was a means of dealing with the instability of my family’s movement. As we followed migrant economic routes across Mexico and the United States, I also shadowed my mom’s dance steps to the beat of cumbia, salsa, and merengue, dancing in living rooms, quinceañeras, and multicultural assemblies. She was my first dance instructor, though she did not consider herself as such. Through these steps, I found an adoration for dancing fiercely and freely through the tumult of uncertainty.

The experiences of displacement are the origin of my research inquiries in my work and in collaboration with others. I address the connection I see in migration and dance, both disciplines that attend to the movement of bodies in space. For this reason, I dedicate my creative energy to a wide range of communities, including professional dancers as well as undergraduate students, migrant men and women, displaced residents, and high-school and unhoused youth. I see hope in performances that cross borders because through them and in them we build new bridges for a more socially inclusive and environmentally just world.